Steve Davidson began college majoring in ocean engineering and changed to a psychology major in his junior year. Steve became interested in the neural mechanisms underlying pain perception and worked in a research laboratory in that field as an undergraduate. He graduated from the University of New Orleans in 2003. He was admitted to the Graduate Program in Neuroscience at the University of Minnesota in the fall of that year. The large group of investigators who are interested in pain attracted Steve to the University of Minnesota. Steve has been working with his advisor Glenn Giesler for four years using electrophysiological methods to examine the role of spinothalamic tract neurons in pain and itch. To date, he has published two articles in the Journal of Neuroscience, one of the most respected journals in the field. He successfully competed for a individual predoctoral research award from NIH to support his research in 2007. He has won several prizes for his research including the Milne and Brandenberg award and the Hermann Handwerker Prize for his presentation at the International Forum for the Study of Itch. His research on itch and the neural mechanisms underlying the effects of scratching was described in an editorial focus in Science. 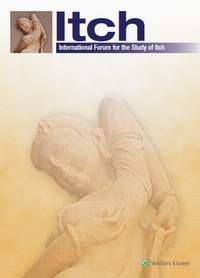 Itch, the official journal of the International Forum for the Study of Itch (IFSI)
read more »

Outdated Browser×
Got it!